In the last article, I did a literature review defining the origin of SQL, NoSQL, and NewSQL. I also went over the important theorems and properties that could help in the categorization and comparison of the different types of databases. If you haven’t read that article yet, I highly recommend you to go over it: SQL vs NoSQL vs NewSQL: An In-depth Literature Review. In this article, we will build upon those concepts and learn how to categorize NoSQL databases based on the type of data we intend to store.

NoSQL provides a simple and flexible technology for the storage and retrieval of such data. This new DBMS drops the structure, entity relationships, and most of the other principles of the ACID (Atomicity, Consistency, Isolation, Durability) model. Instead, it proposes a more flexible model named Basic Availability Soft State Eventual Consistency (BASE).

The most commonly employed distinction between NoSQL databases is the way they store and allow access to data. While Relational databases require all data to neatly fit into tables, NoSQL offers different database solutions for specific contexts without having to use a specific schema. The “one size fits all” approach of relational databases no longer applies.

According to the classification on the NoSQL database official website 2, there are 15 categories of NoSQL databases. This classification is based on the logical organization of the data (also called data models), meaning the way the data are stored in the database. Its query model specifies how to retrieve and update the data. There are hundreds of readily available NoSQL databases, and each has different use case scenarios. They are usually divided into four categories, according to their data model and storage: Key-Value Stores, Document Stores, Column Stores, and Graph databases.

As the name suggests a key-value store consists of a set of key-value pairs with unique keys. The data is stored and accessed using keys and almost all queries are key lookup based. Key-value stores do not assume the structure of the stored data, meaning that both the key and the value can be of any structure and NoSQL has no information on the data; it just delivers the data based on the key.

If the use-case requires any assumptions about the structure of the stored data, it has to be implicitly encoded in the application logic (i.e. schema-on-read), and not explicitly defined through a data definition language (i.e. schema-on-write) 3. These stores do not support operations beyond the get-put operations-based CRUD (Create, Read, Update, Delete), and their model can be likened to a distributed hash table. They also usually do not support composite keys and secondary indexes. A logical data structure that can contain any number of key-value pairs is called a namespace.

Key-value stores commonly apply a hashing function to the key to obtain a specific node of the physical network where the value will be finally stored. To allow easy addition and/or removal of nodes, several databases take advantage of the concept of Consistent Hashing. Amazon’s DynamoDB made further improvements in this partitioning scheme by introducing virtual nodes. Similar to Consistent Hashing, some databases like Membase/CouchBase use Virtual Buckets or vBuckets to overcome the problem of redistributing keys when a node is added or removed. 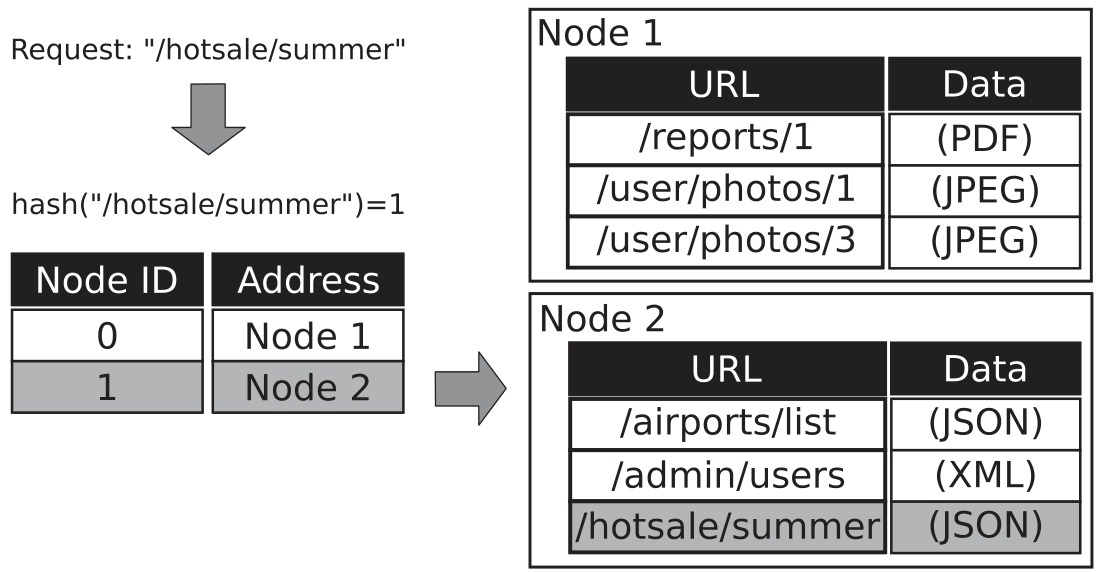 Key-value stores can be categorized into three types in terms of storage options: temporary, permanent, and hybrid stores. In temporary stores, all the data are stored in memory, hence the access to data is fast. However, data will be lost if the system is down. Permanent key-value stores ensure the high availability of data by storing the data on the hard disk but with the price of the lower speed of I/O operations on the hard disk. Hybrid approaches combine the best of both temporary and permanent types by storing the data into memory and then writing the input to the hard disk when a set of specified conditions are met 4. Some of the in-memory key-value systems are Redis, Ehcache, Aerospike, and Tarantool. Persistent key-value systems include RocksDB, and LevelDB 5.

Key-value stores are generally good solutions if you have a simple application with only one kind of object, and you only need to look up objects based on one attribute 4. Some examples of use-cases for KV stores are listed below 6.

Document stores extend the unstructured storage paradigm of key-value stores and make the values to be semi-structured, specifically attribute name/value pairs, called documents. A document, in this context, is a JSON or JSON-like object (such as XML, YAML, or BSON). This restriction brings flexibility in accessing the data because it is now possible to fetch either an entire document by its key or to only retrieve parts of the document. The document-oriented database still regards the document as a whole, instead of partitioning the document into many key/value pairs. This enables the documents of different structures to be put into the same set. The document-oriented database supports document index, including not only primary identifiers but also document properties 7. Also, unlike key-value stores, both keys and values are fully searchable in document databases. They also usually support complex keys along with secondary indexes.

Each document can store hundreds of attributes, and the number and type of attributes stored can vary from document to document (schema-free!). The attribute names are dynamically defined for each document at runtime, and values can be nested documents, or lists, as well as scalar values. Most of the databases available under this category provide data access typically over HTTP protocol using RESTful API or over Apache Thrift protocol for cross-language interoperability. A group of documents is called a collection. The documents within a collection are usually related to the same subject, such as employees, products, and so on.

Document stores make it possible to add and delete value fields, modify certain fields, and query the database by fields. Queries can be done on any field using patterns, so, ranges, logical operators, wildcards, and more, can also be used in queries. The drawback is that for each type of query a new index needs to be created 8. According to db-engines 9, some highly ranked document-oriented systems include MongoDB, Couchbase, CouchDB, Realm, MarkLogic, OrientDB, RavenDB, PouchDB, and RethinkDB.

A Document-oriented database is useful when the number of fields cannot be fully determined at application design time. Some examples of use-cases for document stores are as follows.

While the relational databases store and process the data with a row as the unit, column-oriented stores process and store the data with a column as the unit. A column-oriented store (also known as extensible record stores, wide-column stores, and column-family stores) stores each row by splitting it vertically and horizontally across the physical nodes of distributed systems. Each row can have one or more column families and is identified by a row key. Each column family can also act as a key to manipulate one or more columns. Technically a wide-column store is closer to a distributed multi-level sorted map (or a two-dimensional key-value store): the first-level keys identify rows that themselves consist of key-value pairs. The first-level keys are called row keys, the second-level keys are called column keys 3. 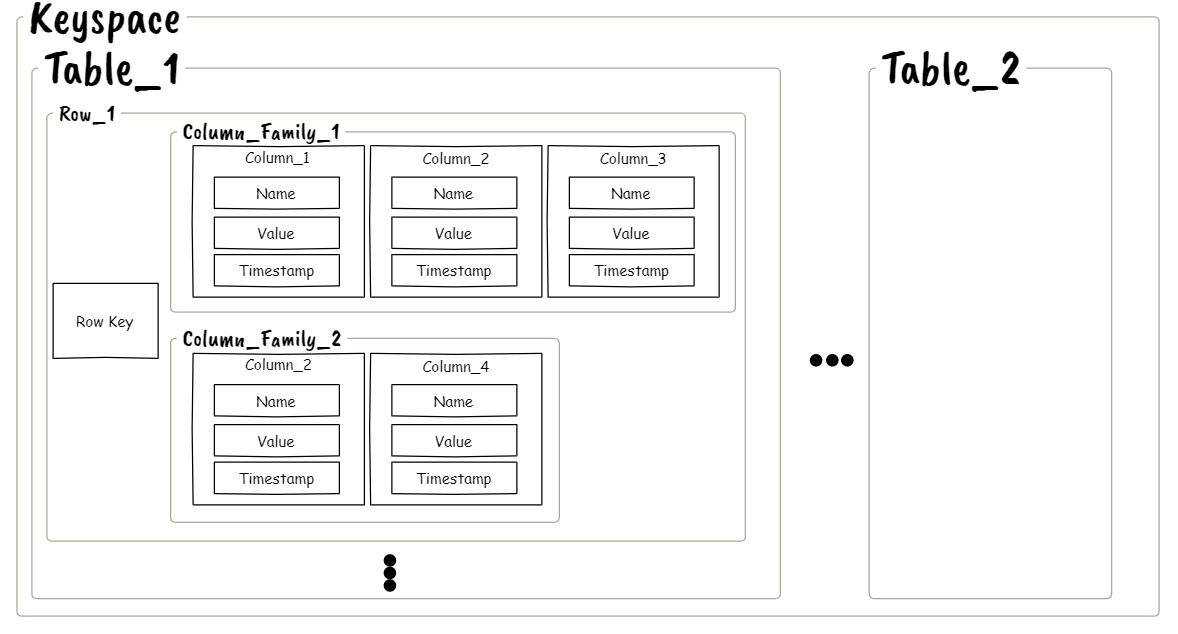 A Keyspace is used as the repository for the tables. The row key is similar to the key used in key-value systems for data manipulation. The set of all columns is partitioned into so-called column families to colocate columns on disks that are usually accessed together. Each column family acts as a key to manipulate one or more containing columns. Wide column stores are also called extensible record stores because they store data in records with the ability to hold very large numbers (billions) of columns (schema-free!). These column-wide data management systems are flexible enough to store the data of any format or type. The following figure represents a sample table in a wide-column datastore 4. 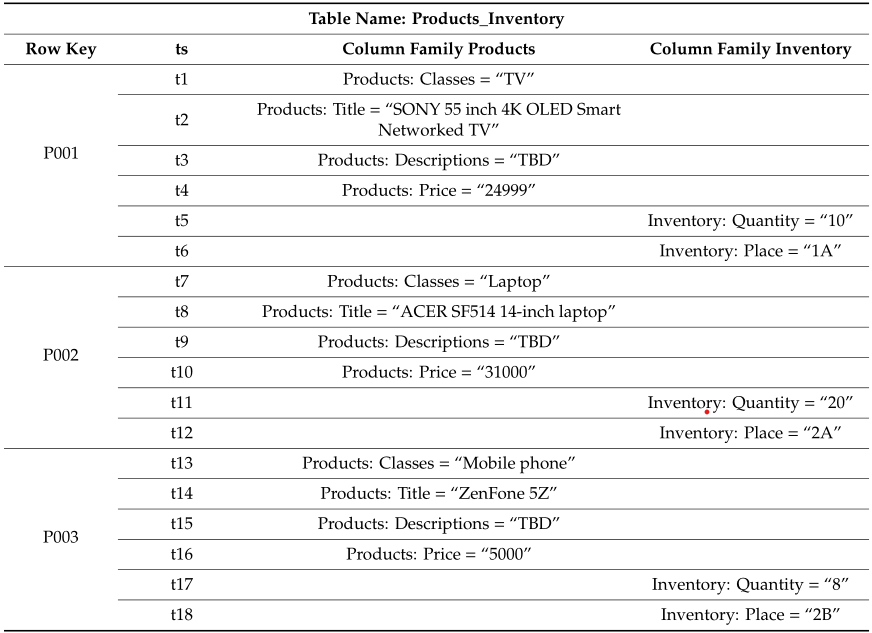 Figure: An example of a data table in a wide column store.

On disk, wide-column stores do not co-locate all data from each row, but instead values of the same column family and from the same row. Hence, an entity (a row) cannot be retrieved by one single lookup as in a document store but has to be joined together from the columns of all column families. However, this storage layout usually enables highly efficient data compression and makes retrieving only a portion of an entity very efficient. According to db-engines 10, some of the column-oriented systems that are ranked high include Cassandra, HBase, Google Cloud Bigtable, Accumulo, and ScyllaDB.

These stores are very efficient (low latency and load times!) when an aggregate needs to be computed over many rows but only for a notably smaller subset of all columns of data. They also work well when new values of a column are supplied for all rows at once, because that column data can be written efficiently and replace old column data without touching any other columns for the rows.

Graph-oriented systems are based on graph theory that represents the objects as nodes of the graph and their relationships as the edges. In graph-oriented systems, the main focus is on the relationships, which naturally represent data and their relationships. This reduces the overhead of joins that involves the merging of columns from one or more tables. Instead of joins, each node possesses a record list of the relationships that it holds with the other nodes, eliminating the need for foreign keys and join operations 11. The graph-oriented systems are widely used in applications that embody complex relationships such as recommendation systems and social networking applications. Graph databases help us to implement graph processing requirements in the same query language level as we use for fetching graph data without the extra layer of abstraction for graph nodes and edges. This means less overhead for graph-related processing and more flexibility and performance. 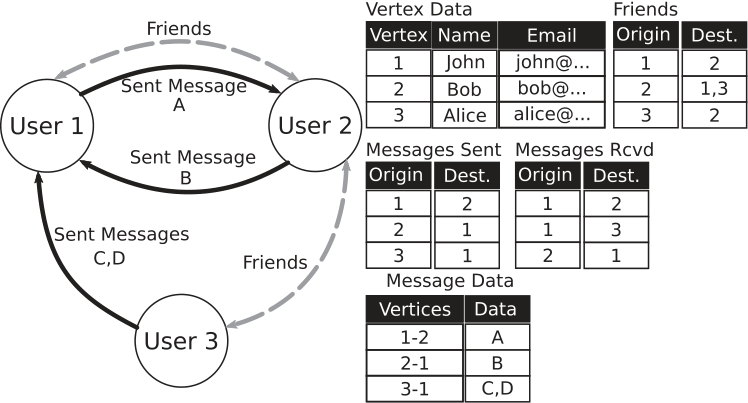 Figure: Example of vertex representation in a Graph-oriented database.

The above figure shows an example where users in a system may have friendship relationships (i.e., undirected edges) and send messages to each other (i.e., directed edges). Undirected edges are commutative and can be stored once, whereas directed edges are often stored in two different structures to provide faster access for queries in different directions. Additionally, vertices and edges have specific properties associated with them, and thereby, these properties must be stored in separate structures. According to db-engines 12, some of the graph-oriented systems that are ranked high include Neo4j, JanusGraph, TigerGraph, Dgraph, Giraph, Nebula Graph, and FlockDB. 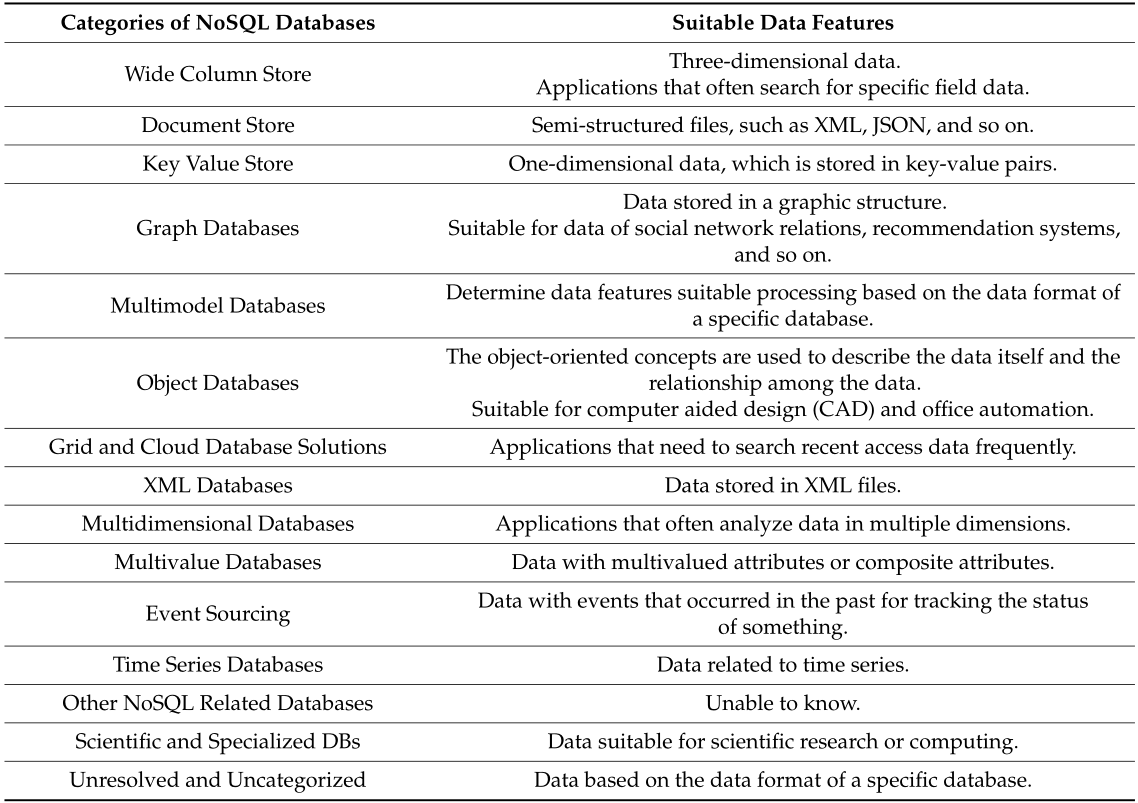 Within the family of NoSQL databases, different systems handle size, data model, and query complexity differently. Big data requires NoSQL database solutions to address velocity and variety of data more than data volume. This notion comes from the belief that 90% of web-based companies will likely never rise to the volume levels implied by NoSQL 4. The following figure plots the different NoSQL data stores on the data volume vs. modeling complexity dimensions. There is a tradeoff between size and complexity, as can be noticed from the figure. 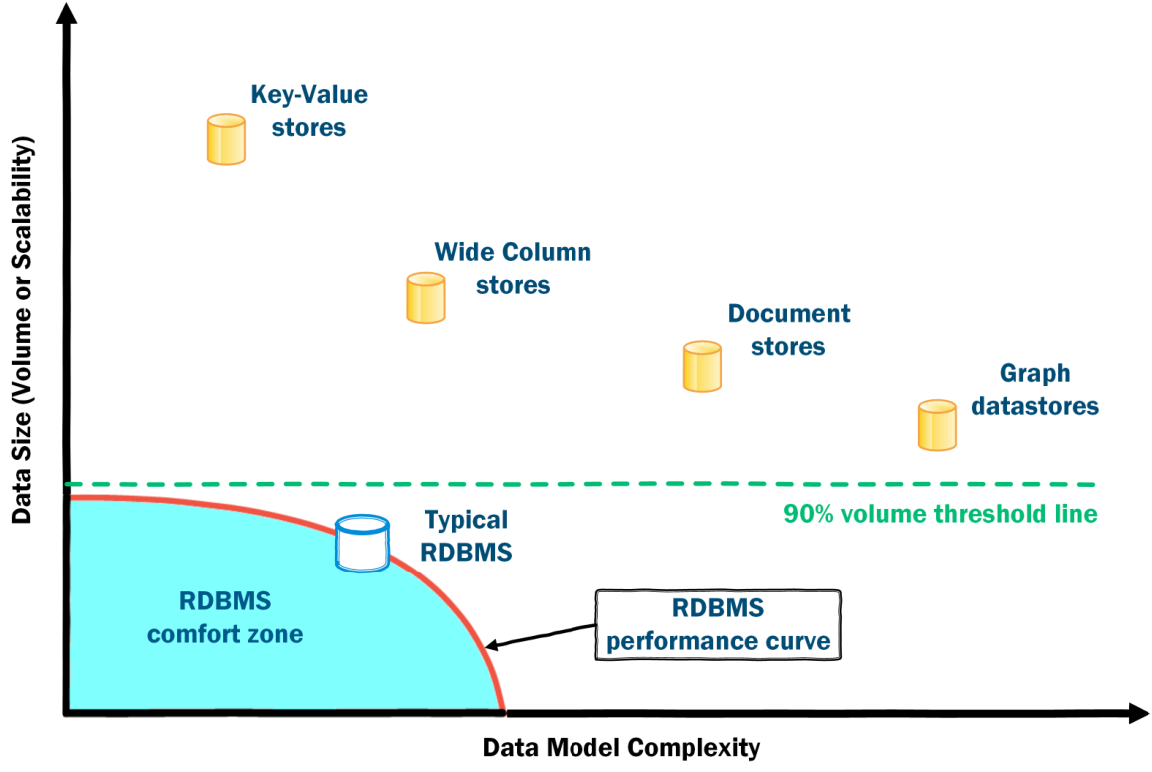 Further, these NoSQL stores can also be compared based on non-functional requirements as shown below 14.

The most commonly employed distinction between NoSQL databases is the way they store and allow access to data. Understanding the storage model characteristics of the NoSQL databases can help individuals or organizations in selecting the most appropriate class of databases for specific data feature requirements. This article explored the four most popular NoSQL data storage models. We looked at strengths, weaknesses, and specific application domains for each of those database models, along with a basic comparison among them.

In the next article, we will look at the most popular database examples from each of the NoSQL models explained above. We will compare those individual databases against each other on functional and non-functional requirements. That comparison will further help the users in selecting the most appropriate database for their specific data application requirements.